Finally, a Mobile Chicken Coop One Person Can (Easily) Move 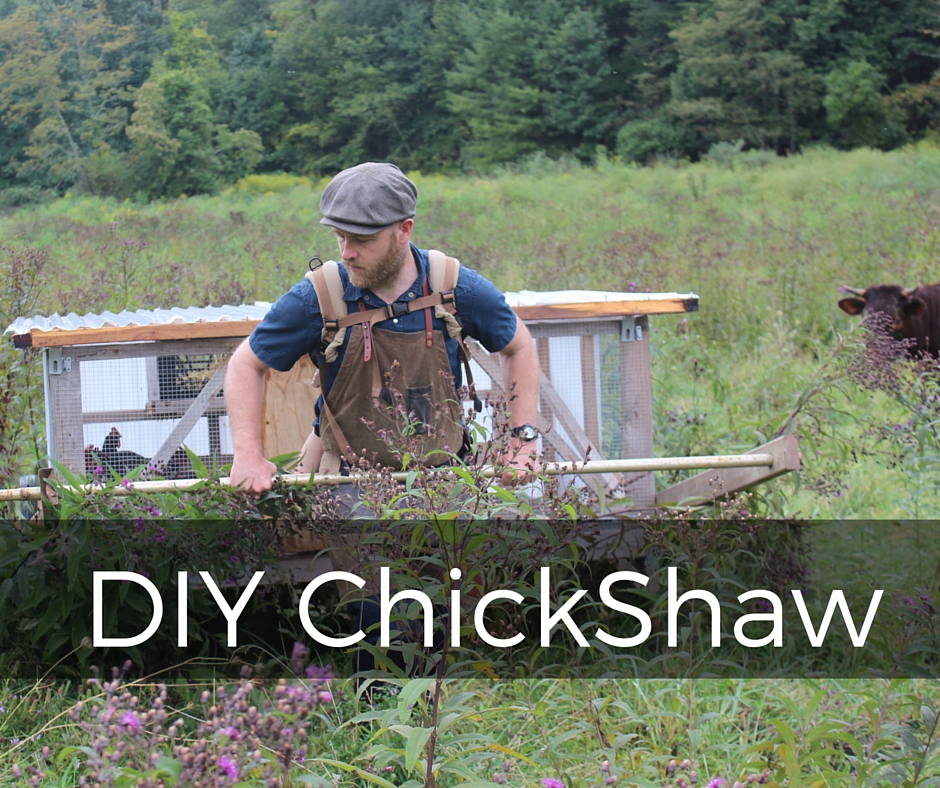 Meet the “ChickShaw”: A mobile chicken house that one person can move (a lot) of chickens.

Since the 19th century people have been moving people with rickshaws.

By centering most of the “shaws” weight on the center of gravity of the two wheels, and pulling the front, it’s easy to move incredible amounts of weight.

Because now, I’m taking that old technology to start moving (and housing) my chickens.

… and I’m giving away the downloadable (printable) PLANS HERE.   UPDATE:  I’ve come out with a smaller ChickShaw MiniMe (for 24 Birds or less)

The future of small scale chicken housing is here.

Chances are, your chickens are WAY overdue for a move.

Most folks keep their chickens in a “classic” coop and run, but that just so happens to be one of the most labor intensive, and unsanitary methods for raising chickens.

It’s now possible to move your chickens regularly with electric poultry net and my ChickShaw, even if you have a lot of birds (up to 60).

Now, the homesteader can move his flock of 40-60 all by himself (or herself) over all kinds of terrain.

And, it’s not just light weight.

Perches are built into the floor to save height and weight making it easy to move while keeping costs low.

The door is also the ramp, making it super easy shut them up at night and let them out in the morning.

The roof is on hinges for those time you need to access chickens, or place something inside (like a dust box).

The handle for pulling the “Shaw” is easily removed for easy access and can be use to prop up the roof lid.

Large, non-pneumatic wheels can’t go flat and will traverse crazy terrain. Plus, they’re tall enough so that the chickens can get under the house for shade and aerial predator protection during the day.

Uses my self cleaning, “pre-made”, milk crate, nesting box design that you can access individually from the outside. No more going in the coop for eggs. And if you forget your egg basket or need to transfer a broody hen. Just use the milk crate!

If you need more info on how to manage chickens in a mobile paddock system, check out Rich Soil’s article, “Raising Chickens 2.0 – No More Coop and Run”.

NOTE: The plans below are for my original ChickShaw. I’ve since created an updated ChickShaw 2.0 with improvements and ChickShaw MiniMe (for 24 Birds or less).

Note: Cedar is naturally weather-resistant and non-toxic, but it’s expensive. You can save money by purchasing NON pressure-treated lumber, but you’ll need to paint the wood or apply a sealer, being sure to use an eco-friendly (non toxic) source.

(Note: These are the tools I actually use and truly suggest. You may like to know that some of the links are affiliate links, which means I’ll get a commission if you purchase)

(Note: These are the tools I actually use and truly suggest. You may like to know that some of the links are affiliate links)

Ok, this is fun…I hope. Well, I bet you’re having more fun than I had when I built this from scratch… or maybe you’re saying, “these instructions are crazy”. Hey, I welcome all feedback, even if it’s derogatory.

Do you see the four vertical posts along the sides, in the photo below? Not the corner posts, but the side posts. The ones in the front (towards the creek) are your 2X2X25½”.

Here’s the tricky part. Since your top side rail is sloping, you’re going to have to cut an angle in the top of these posts. I have no freakin idea what that angle is, so I went ahead and set the post up (it’s a little long) 2’ from the end, then marked the angle with pencil like so:

Let’s start with the easy. Take your two 2X2X22½” and insert them into the front wall, two feet from either side. Notice how they so conveniently rest on top of the perches. Screw the bottom in with a framing angle and screw the top in by screwing through the top rail.

Hold your braces up, one at a time, and mark your angles and cut accordingly. If you mess up a bit, it’s not that critical. In fact, I was tempted to just go back and measure how much it would be to run a straight piece in (no angles) but the angles look good.

See that horizontal piece going across the middle of the back? That’s your 5’5” piece. Go ahead and screw it in. I would use a couple of framing angles, one on either side, to screw this piece into your 2X4 corner post. Oh… I almost forgot. Place the horizontal board 15¼” up from the bottom framing. Just to make sure I communicate this right. Measure 15¼” from the top of the bottom 2X4, and make a mark at 15¼” on your two back corner 2X4’s. Now, you’ll want to place your 5’5” horizontal 2X2 just above the line (do not center your horizontal board on this line, but rather put it on top). Got it? Good.

Take your two 6’1” 2X2’s and set them along the inside wall, like the picture shows. Notice how I screwed the top end into the top side rail, and how “toenailed” the bottom end into the vertical front corner post. (And if you’re wondering what a toenail is, a toenail is hammering a nail or screwing a screw at an angle into a board.)

Cut two 27½”  pieces and staple nail them into the front two side on the front wall.

Now, cut two 28” pieces and staple nail them into the front two sides on the side walls.

Now that I’m talking about characteristics of a chicken, I should mention that they’re also rather sloppy (aka poop in their nest box if you let them). So let’s make this landing bar swivel. That way, if our chickens start perching in their nest boxes, we can lift the landing bar  (in the afternoon after they’ve laid all their eggs) to be a nesting box blocker. Then, they won’t perch in the nesting box and poop all over the place.

Mounting the Nesting Area Base to the Main Frame

You’ll have to forgive me, the foremost brace is blurry! At first, I didn’t even want to include this pic, but I think it’s super helpful. Let’s just pretend all is well, as we focus on the diagonal brace further away. It’s all nice and clear. Hey, I’m not perfect.

After you’ve put on those diagonal braces you can remove that “jerry rigged” scrap lumber that’s helping to hold up the nesting area.

Place your middle paneling for the back wall (the one that’s 18” tall), and screw it in. The side panelings will overlap, and that’s ok.

Go ahead and attach your two side panels for the back wall (the ones that are 31”) . Yep, the corners will cover the opening to the nesting box. Take your tin snips and cut off the corners to reveal the opening into the next box.

Screw your “back” side panels in. They’re also 31” long. Place them so that the extra is sticking over the top. Go ahead and tin snip what’s “overhanging”.

Screw in three 14” 2X2’s into your 2X2 piece of plywood somewhat evenly like so:

Moving the Birds Into Their New Home

Congratulations! You made your very own ChickShaw!

What are you waiting for?