Home » Blog » How to Butcher a Chicken

How to Butcher a Chicken

Do you raise meat to eat? For those of us wanting to grow our own food and show more respect to the animals that provide that for us, we’re eventually going to want to take the butchering process into our own hands. 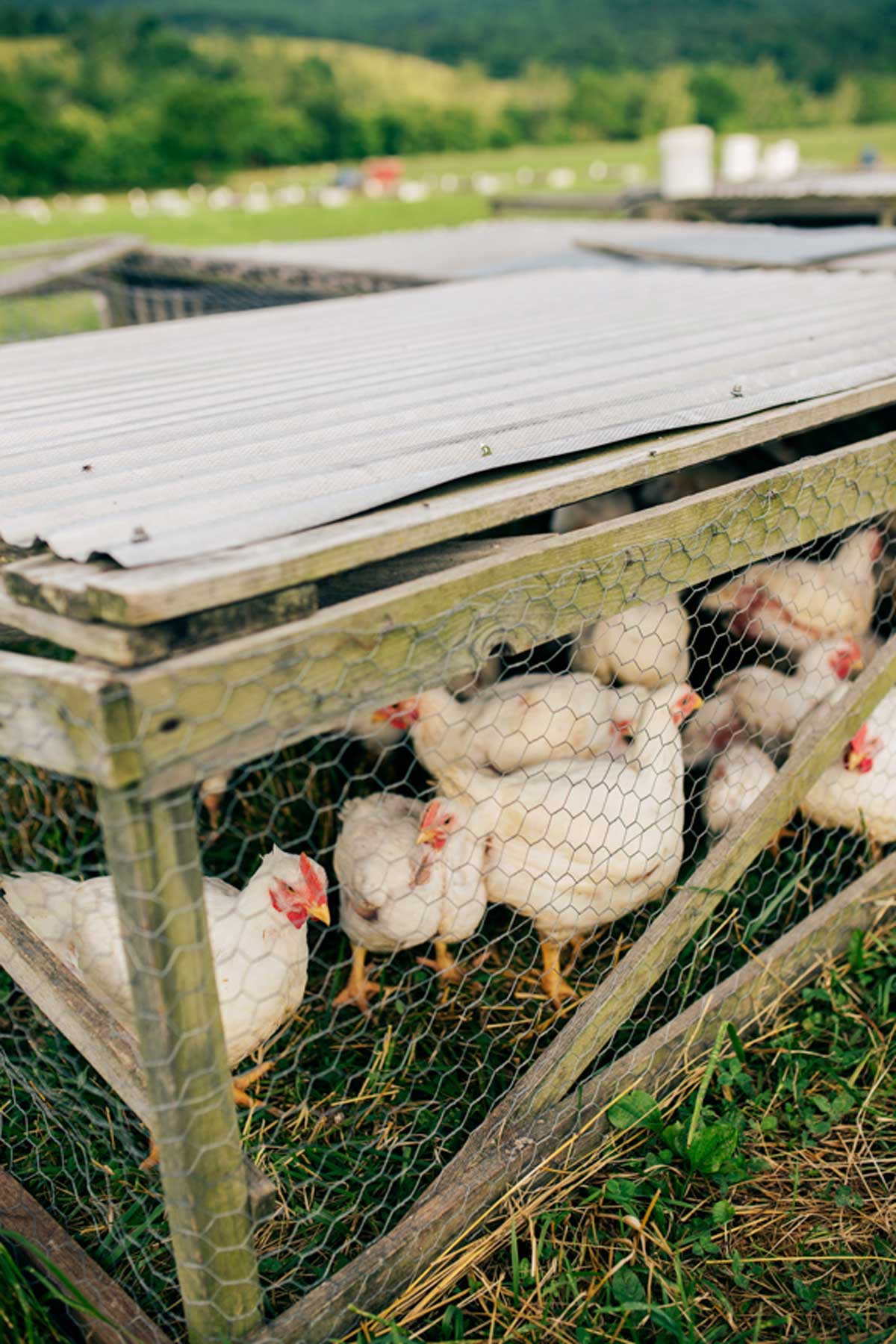 NOTE: Please be aware that this blog post contains photos of the chicken butchering process. If you’re uncomfortable seeing these images, this post isn’t for you!

You’ve raised chickens from baby chicks to the brooder stage, learning how to raise and care for meat chickens, even utilizing a chickshaw for keeping them out at pasture.

Now it’s time to learn how to butcher your chickens. Processing our free-range chickens means a much better completion of the process for our meat than the factory alternative.

Follow along as I teach you how to butcher a chicken at home from beginning to end. Learn how to kill, pluck, clean, and skin it with or without expensive equipment. Video included for both methods!

How do you Humanely Slaughter a Chicken?

My mentor, Steve Meeks, taught me something I’ll never forget. Death is ugly and awful, but something dies every day so you and I can live. It may be a chicken, a head of lettuce or an oak somewhere in the forest, but things die so you can live.

Respect for the animal by treating it gently and calming it before killing it helps to ease the process for you and the bird. Death is not instantaneous, but it happens in seconds for chickens.

There is a lot of different equipment available for butchering whole chickens. What you choose to use will depend on the number of chickens you are butchering.

I’m sure our ancestors were pros at chicken butchering, and they got the job done with very few tools. You can use their minimalistic approach and fill your freezer with meat. They used the equipment available to them.

In modern times, we have way more equipment available to us. Using the minimalist approach will work just fine if you are butchering a small flock of 12-15 birds. However, if you have a lot of birds, you will save yourself a great deal of time and work if you purchase or borrow equipment.

One Week Before Butchering

Make a checklist and order or pick up any supplies you might need before butchering day.

24 Hours Before or Early the Day of Butchering

Designate an area for processing that’s shady and has access to electricity and running water. Set up your processing area the day before or the early morning before slaughter and sharpen your knives.

Withhold feed from chickens to make sure their crop is empty. This is not a necessity but makes it easier and cleaner when processing. I just separate the chickens I’m going to butcher into a cage or a pastured poultry pen depending on how many I’m processing before I feed the morning of the butchering since the chickens don’t have feed at night.

Get your scalder going in plenty of time to get to your desired temperature. It can take several hours for an electric model or a fire to heat water up to 145° F, so plan accordingly.

How to Butcher a Chicken Step-by-Step

1. Place the chicken in the restraining cone and gently pull her head through the bottom. When using the minimalist method, secure the chicken’s legs with some string, and hang upside down against a wall (my barn worked well for this).

2. Hold the head with your subordinate hand and quickly slice into the side of the neck as close as you can get towards the cheekbone. This optimizes the amount of neck you can save. Be sure to slice hard enough to get through the skin and into the blood veins but not too hard as to begin cutting into the neck and/or windpipe. Once you’ve cut the major artery, they will lose consciousness and feel no more pain. The chicken’s nerves might kick in, and they will begin to jump, but rest assured, they are unconscious or even dead and don’t feel a thing.

3. Quickly slice the other side of the neck to encourage a quick bleed. Have you noticed purple, red and black spots inside of chicken meat from the grocery store? This is because they were most likely electronically stunned before they were allowed to bleed. Stunning will cause the heart to stop, therefore not allowing all the blood to get out of the meat.

4. Bend the chicken’s head to encourage bleeding and hold her head steady if her nerves cause her to shake. If there’s lots of blood coming out, you’ve made a successful kill. If not, you’ll need to quickly slice again until sufficient blood flows. She’ll bleed a lot initially but will slow significantly after the first few seconds and will trickle to 3 minutes.

5. Place your chicken in scalding hot water. Notice I didn’t say boiling water. I like a temperature of about 145° F.

6. Thoroughly and evenly scald by moving the chicken around with your poking device. At 145° F it takes 30 seconds to a minute. You can test the bird during the scald by peeling at her feet and/or wings. The scald is good if her feet easily peel and the wing feathers easily come out. If you don’t scald long enough, it will be more difficult to pluck. If you scald for too long, your chicken’s skin will begin to cook and might begin to peel and be discolored (yellowish).

7. Dip the scalding chicken into a pot of cool water to stop the cooking process.

8. Pluck the chicken by hand or speed up the work significantly with a machine (up to 10X faster).

9. Pick off any excess hair or pin feathers.

11. Remove the toenails by bending and pulling against the curve.

12. Cut off the leg by cutting between the joints. Lifting the chicken can help reveal the joint.

13. Pull or cut off the head with your shears.

14. If you’re going to save the head for cooking, rub the coating off the comb and wattles and pinch the beak to pull off the cuticle.

15. Singe if desired. You’ll notice small hairs are likely to remain on the carcass. You can remove them by hand or with a singe torch. However, there’s no harm in keeping them. I manually pull out any major patches, but other than that, I don’t worry about it.

16. Cut the skin around the base of the neck to reveal the crop. Peel the crop downward off of the breast bone.

17. Put your thumb through the neck between the neck, crop, esophagus and windpipe and pull the crop and skin off.

19. Cut the neck with your shears angled down from the body, so there are no bones to pierce future storage bags.

20. Cut the oil gland off by slicing down and out.

21. Make a small slit through the abdomen skin as close as possible to the vent so as not to cut any entrails. Accidentally cutting the entrails could mean cutting into the intestines and spilling out the bacterial-ridden material.

22. Open the carcass using both hands.

23. Reach in, scraping against the rib cages with your fingernails, loosening the entrails from the body. Some folks may prefer to use latex gloves for this.

24. Hook the esophagus in your finger or just grab behind the entrails and pull them out altogether.

25. Rest the chicken on the sink counter while hanging the entrails into the sink. With the help of gravity, cut off the heart and liver. I sacrifice some of the liver so as not to cut the bile duct. If you cut the bile duct, it’s no disaster, just quickly rinse the bird.

26. Put the heart and liver into your stainless steel bowl of cold ice water, if you’re saving them.

27. Cut away the gizzard. If you’re saving the gizzard, cut it open long ways from one end, remove the insides and the yellow lining, rinse, and set aside.

28. Save the testicles from males for consumption, if desired. The head, neck, gizzard, feet, testicles, and liver are all edible and considered delicacies in many countries.

29. Cut away the entrails, getting as close as possible to the vent to save as much fat as you can.

30. Pull the lungs out. This can be a bit tricky and is hard to explain. Reach in and dig into the rib cage, scraping the lung with your fingernails to pry them out.

31. Rinse your bird and place it in the cooler.

Cutting the Bird into Pieces

If you want to go ahead and part your bird, here’s how to do it quickly and easily.

Now that you’re finished butchering, I should mention how to get rid of all the unwanted goods.

Feed the feathers to the chickens or compost them. Feathers are full of protein. What the chickens don’t eat will decompose, adding to your deep litter coop or run.

Compost the entrails, blood, and any other unused parts by burying them deep inside a compost pile. You must put them in deep or unwanted animals will dig out your pile.

Another option is to dump the excess at the edge of your property to feed your predator population, which helps to satisfy their hunger on something other than your live chickens. 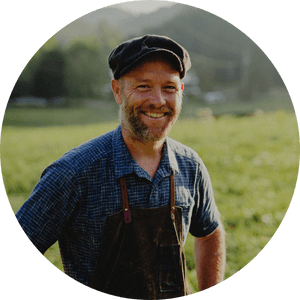 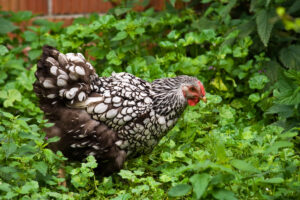 Chickens in Garden Spaces to Till and Fertilize 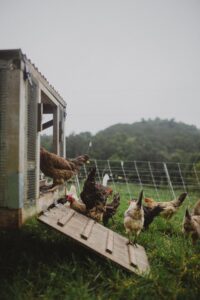 Backyard Chickens – How to Get Started 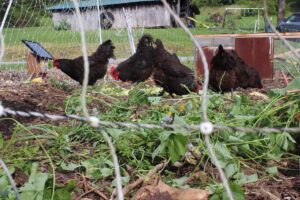 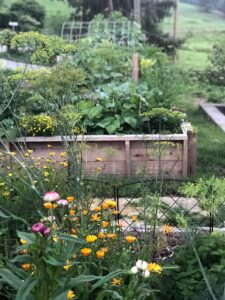 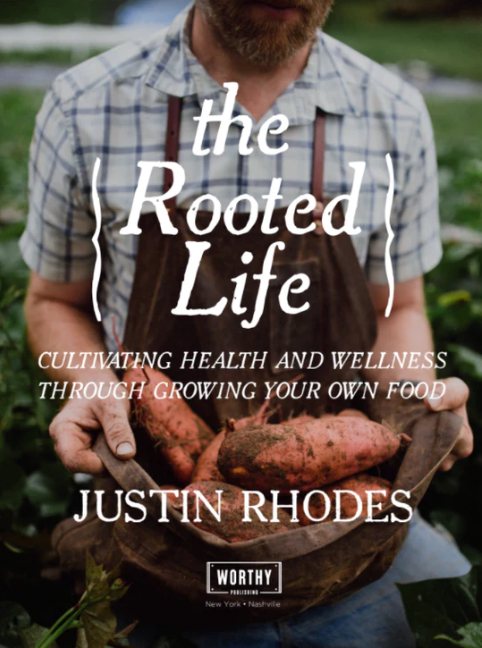 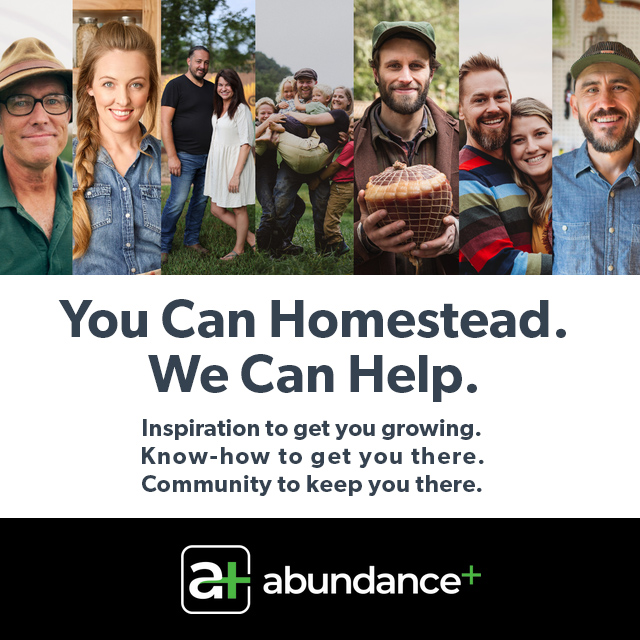 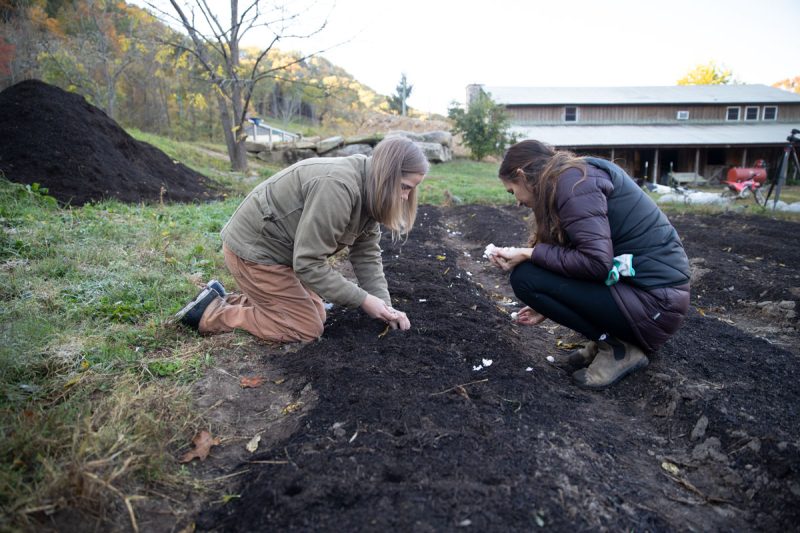 Planting garlic can be easy; learn the best time to plant your garlic bulb in the fall and watch its sprouts come up in the spring.
Read More 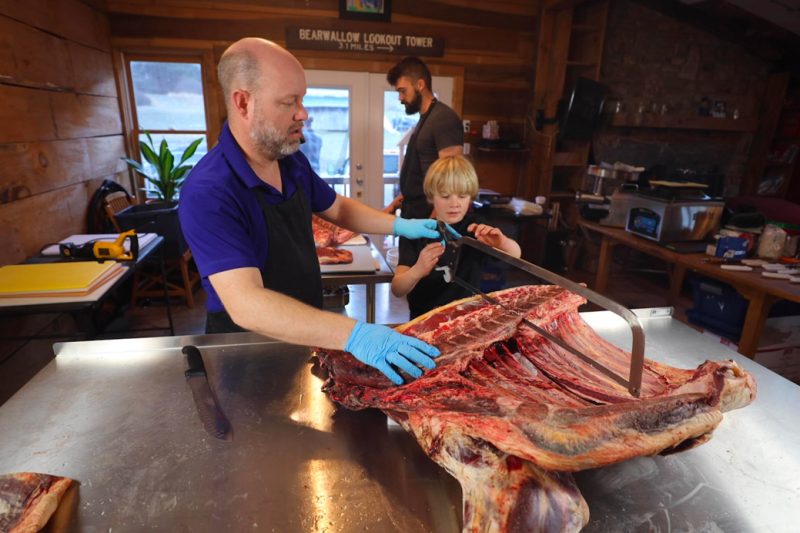 Cuts of Beef – How to Choose When Butchering

Learn the best cuts of beef, the difference between steak and roast, and how to use and cook good tender cuts of meat.
Read More 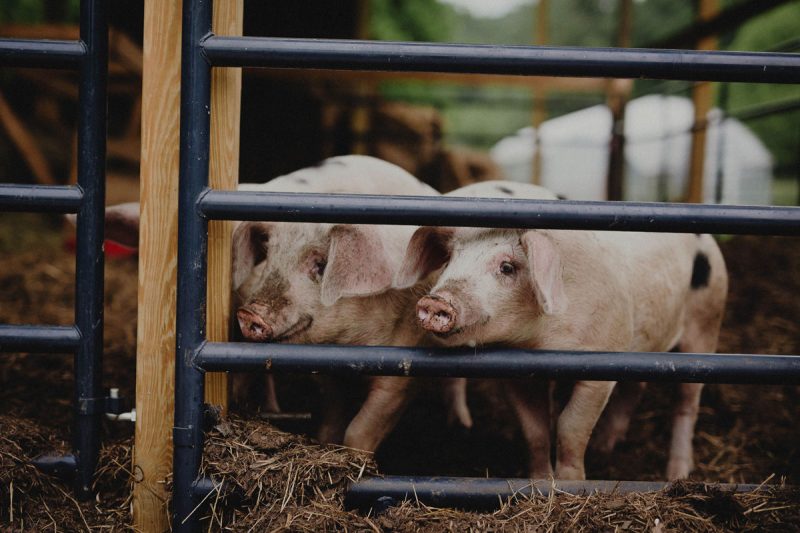 Save on the cost to call a vet. Learn the proper age a baby male pig should be and the best techniques used for castrating pigs. No band
Read More 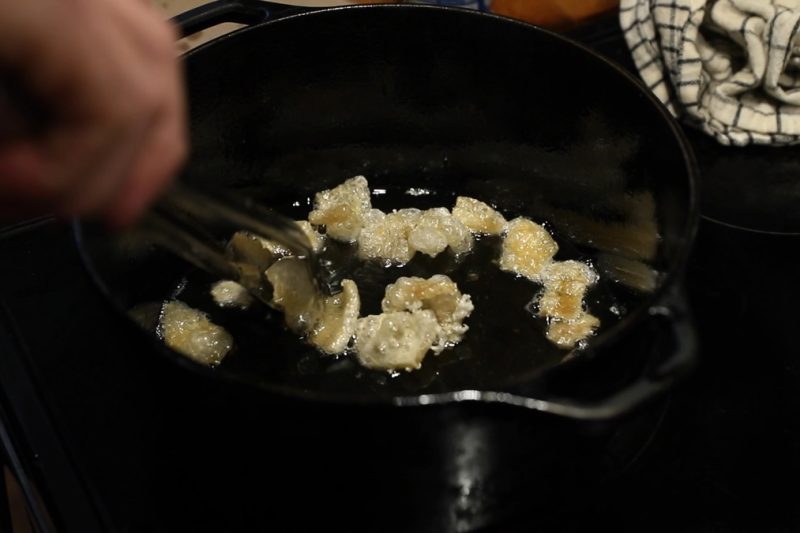 Learn to make healthy carnivore pork rind chips for all your favorite dips and snacks. With this tutorial, you'll soon be enjoying this crunchy, salty treat in your
Read More

How to Braid Garlic and Onions

Learn how to braid garlic and onions for long-term storage, including tips on curing and storing for the best results.
Read More 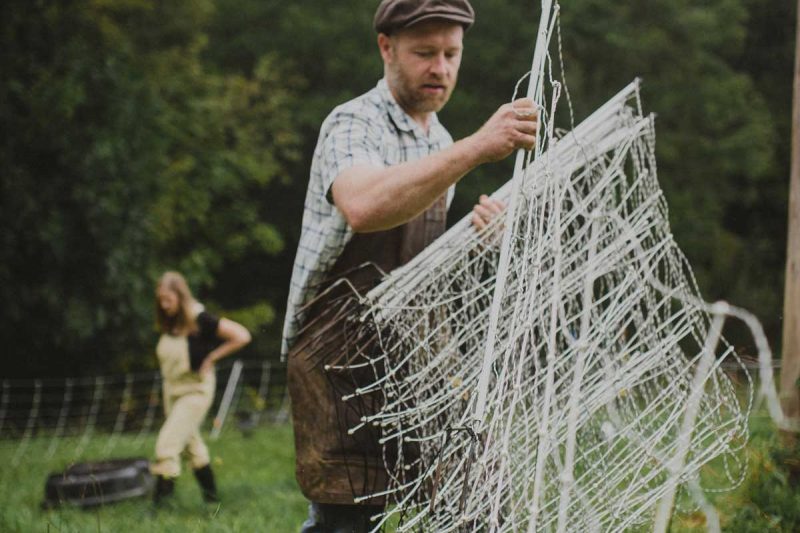 How to Set Up An Electric Fence on the Homestead

Learn how to utilize and set up an electric fence on the homestead to keep your animals in and predators out.
Read More
Previous
Next